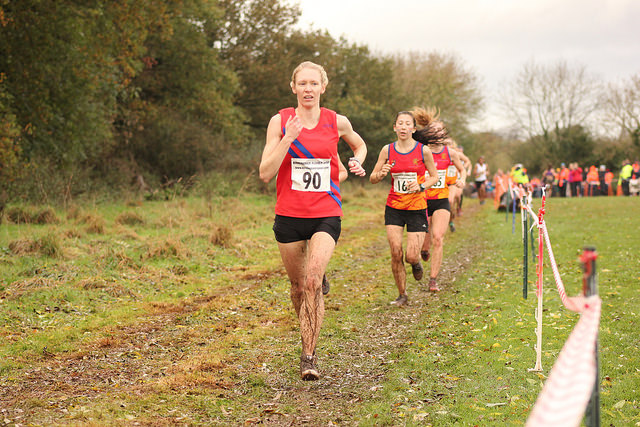 The first Birmingham League XC of the 2014/15 season – combined with the Midlands Women’s League fixture – took place at Newbold Comyn, Leamington (a course known for its ‘real’ cross country credentials), on Saturday 8 November.

Following a series of impressive runs, most notably a 73:49 PB at the Great Birmingham run three weeks ago, Joe Smith was first B&R runner home in the men’s race, finishing 26th overall in a 700-strong field which included all three men’s divisions, in 35:58min.

He was seventh in last weekend’s Gloucester League XC in Malvern – a high quality race won by David Roper of Cheltenham who was sixth overall in Leamington.

The race was won by Birmingham Uni’s Ed Shepherd in 33.09, leading his team to first overall.

The next race in the Birmingham League will be split into divisions, and going into that event, B&R – who are currently in division 2 – are in third place, which would be good enough for promotion at the end of the season if they can maintain that level of performance.

The women’s field in Leamington was equally strong and there was no denying the quality as GB&NI representative Jess Judd lined up in a record field of 369 runners.

Sally Hogan, after a tough summer of illness, returned to racing with a positive 46th place finish in 26:35 followed by Tamara Ball in 65th (27:15), who put in another consistent captain’s performance to secure an impressive seventh-place team finish on the day.

It was a great turnout from the club including the non-runners on the day who provided great support as always, so thanks to everyone.

Next up is the Birmingham Men’s League at Plock Court Gloucester and Midland Women’s League at a venue still to be decided on Saturday 6 December.